A colleague recently pointed out to me the results of this paper by Ariki, Terasoma, and Yamada, or more concisely summarized here. The authors give a basis of the ring of coinvariants $$R_n=\mathbb{C}[x_1,\ldots,x_n]/(e_1,\ldots,e_n)$$ which, unlike the other bases we’ve discussed on this blog so far, respects the decomposition into irreducible $S_n$-modules. These basis elements include the ordinary Specht polynomials, but also some polynomials of higher degrees, hence the name “higher” Specht polynomials.

Background: What is a Specht polynomial?

Before we describe this basis, recall that the dimension of the irreducible representation $V_\lambda$ of $S_n$ indexed by the partition $\lambda$ is equal to the number $f^\lambda$ of Standard Young Tableaux (SYT) of shape $\lambda$, i.e., the number of fillings of the Young diagram of $\lambda$ with the numbers $1,\ldots,n$ in such a way that the entries are increasing down rows and across columns. An example is shown below for $n=7$ and $\lambda=(3,3,1)$:

In other words, the Specht polynomial for $T$ is the product of the Vandermonde determinants given by each of its columns’ entries. It is known that the set of polymomials $F_T$, where $T$ ranges over all SYT’s of shape $\lambda$, form a basis of their span, and their span is isomorphic to $V_\lambda$ as an $S_n$-module (here the $S_n$-action is the usual action on the variables $x_1,\ldots,x_n$).

Specht polynomials in the coinvariant ring

The ring $R_n$ inherits the action of $S_n$ on the polynomial ring, and we saw in the previous post on the coinvariant ring that it is isomorphic to the regular representation as an $S_n$-module. It is also graded by polynomial degree, with Hilbert series equal to $(n)_q!$. There are many known bases of $n!$ elements that respect this grading, but the ones we have described in previous posts do not respect the $S_n$-action. In particular, can we find an explicit basis which partitions into bases of the irreducible components in $R_n$?

To start, the Specht polynomials $F_T$ defined above are nonzero in $R_n$ and span one copy of each Specht module. But we know that in the regular representation, there are $f^\lambda$ copies of the irreducible representation $V_\lambda$ for each $\lambda$, and this construction only gives one copy of each. In fact, since the copies of $V_\lambda$ must be alternating in the column variables, they are the lowest-degree copies of each. Hence, we need higher Specht polynomials.

To define them, we first need to understand the RSK correspondence and the charge statistic.

The tools: RSK and charge

The RSK correspondence gives a combinatorially described bijection between pairs of standard Young tableaux of the same partition shape $\lambda$ of $n$ (for some $\lambda$) and permutations of $n$. It’s a beautiful bijection, but since the readers of this post will most likely already be familiar with it, I will simply refer the reader to Simon Rubenstein-Salzedo’s clearly-written introduction to RSK.

For example, let $S$ and $T$ be the tableaux given below: 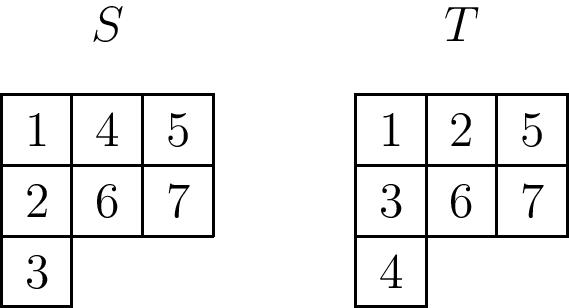 The lowest-degree (minimal charge) case occurs when $S=S_0$ is the canonical choice having elements $1,2,3,\ldots,n$ written in order left to right in each row from top to bottom, as in:

Construction of the Higher Specht polynomials

We now have the tools to describe the construction. Given a pair $(S,T)$ of standard Young tableaux of the same shape $\lambda$, let $x_T^{\mathrm{charge}(S)}$ be the monomial $x_1^{i_1}\cdots x_n^{i_n}$ where $i_k$ is the charge subscript on the cell in $S$ corresponding to the cell containing $k$ in $T$. For example, if we fill the boxes of $S$ in the example above with their corresponding subscripts in the charge computation, it looks like: 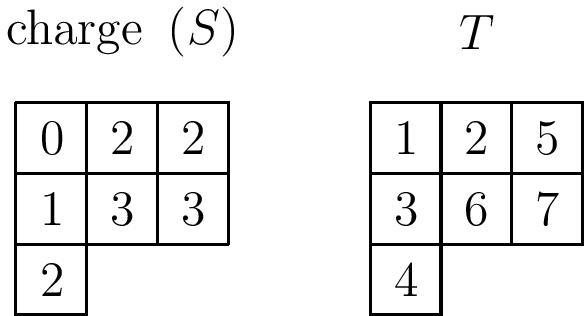 In general the Specht module $V_\lambda$ occurs once for each tableau $S$ of shape $\lambda$, giving the right multiplicities for each irreducible representation.

Thanks to some Sage code by Nicolas Thiery, we can use this formula to efficiently compute the higher Specht polynomials. Here are the polynomials for $n=3$:

In their paper, Ariki, Terasoma, and Yamada actually construct a more general version of the higher Specht polynomials that respects the restricted $S_\mu$-module structure of $R_n$ where $S_{\mu_1}\times \cdots \times S_{\mu_k}\subseteq S_n$ is any Young subgroup. It’s also natural to ask whether there are generalizations of the higher Specht modules to related rings such as the Garsia-Procesi modules or even (we can dream!) the Garsia-Haiman modules.