Somehow, in all the time I’ve posted here, I’ve not yet described the structure of my favorite graded $S_n$-modules. I mentioned them briefly at the end of the Springer Correspondence series, and talked in depth about a particular one of them – the ring of coinvariants – in this post, but it’s about time for…

Also known as the cohomology rings of the Springer fibers in type $A$, or as the coordinate ring of the intersection of the closure of a nilpotent conjugacy class of $n\times n$ matrices with a torus, with a link between these two interpretations given in a paper of DeConcini and Procesi. But the work of Tanisaki, and Garsia and Procesi, allows us to work with these modules in an entirely elementary way. 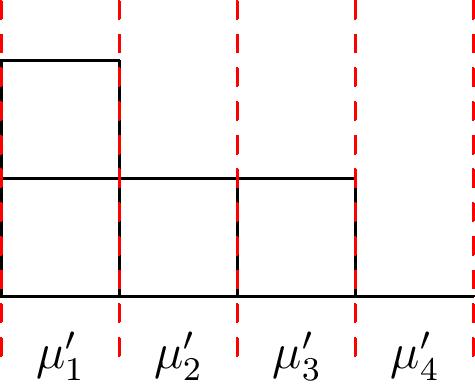 Where do these relations come from? The rings $R_\mu$ were originally defined as follows. Let $A$ be a nilpotent $n\times n$ matrix over $\mathbb{C}$. Then $A$ has all $0$ eigenvalues, and so it is conjugate to a matrix in Jordan normal form whose Jordan blocks have all $0$’s on the diagonal. The sizes of the Jordan blocks, written in nonincreasing order form a partition $\mu’$, and this partition uniquely determines the conjugacy class of $A$. In other words:

There is exactly one nilpotent conjugacy class $C_{\mu’}$ in the space of $n\times n$ matrices for each partition $\mu’$ of $n$.

The closures of these conjugacy classes $\overline{C_{\mu’}}$ form closed matrix varieties, and their coordinate rings were studied here. However, they are easier to get a handle on after intersecting with the set $T$ of diagonal matrices, leading to an interesting natural question: what is the subvariety of diagonal matrices in the closure of the nilpotent conjugacy class $C_{\mu’}$? Defining $R_\mu=\mathcal{O}(\overline{C_{\mu’}}\cap T)$, we obtain the same modules as above.

Tanisaki found the presentation for $R_\mu$ given above using roughly the following argument. Consider the matrix $A-tI$, where $A\in C_{\mu’}$. Then one can show (see, for instance, the discussion of invariant factors and elementary divisors in the article on Smith normal form on Wikipedia) that the largest power of $t$ dividing all of the $k\times k$ minors of $A-tI$, say $t^{d_k}$, is fixed under conjugation, so we can assume $A$ is in Jordan normal form. Then it’s not hard to see, by analyzing the Jordan blocks, that this power of $t$ is $t^{d_k(\mu)}$ where $\mu$ is the transpose partition of $\mu’$ and $d_k(\mu)$ is defined as above – the sums of the ending columns of $\mu$.

It takes somewhat more work to prove that these relations generate the entire ideal, but this can be shown by showing that $R_\mu$ has the right dimension, namely the multinomial coefficient $\binom{n}{\mu}$. And for that, we’ll discuss on page 2 the monomial basis of Garsia and Procesi.