Some of my recent research has centered on crystals, so here’s an introductory post, from a combinatorial point of view, on what crystals are and where they come up.

First, a clarification: the crystals I have in mind are not the chemical kind that you find in nature, nor are they any of these other uses of the word crystal on the Wikipedia disambiguation page. There is yet another use of the word, sometimes referred to as a crystal base, introduced by Kashiwara in the mid-90’s. Kashiwara developed crystal base theory as a way of understanding the $q\to 0$ limit of the representation theory of quantum groups $U_q(\mathfrak{g})$ where $\mathfrak{g}$ is a Lie algebra and $U_q(\mathfrak{g})$ is a $q$-analog of the universal enveloping algebra $U(\mathfrak{g})$. In the quantized statistical mechanics models in which quantum groups come up, the parameter $q$ is a measure of temperature, so the $q\to 0$ limit is exploring what happens in the situation of absolute zero temperature. Hence the word “crystal”, referring to what happens to many forms of matter when frozen. 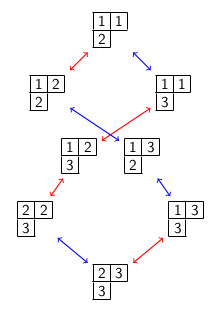 Note that $F_i$ may not be defined, if there is no closed bracket that is not cancelled. If no $F_i$ operator may be applied to a tableau $T$, we say that $T$ is lowest weight. The bottom tableau on the crystal diagram above is lowest weight for the operators $F_1,F_2$. Similarly, we can define raising operators $E_i$ as the natural partial inverses of the $F_i$ operators (simply by reversing the arrows in the crystal graph), and we define highest weight elements as those for which all $E_i$ operators are undefined.

Now here’s the interesting thing: highest weight tableaux or words are precisely the Littlewood-Richardson tableaux that we have encountered in several previous posts. Recall that a tableau is Littlewood-Richardson if its reading word $w=w_1\cdots w_n$ is ballot, meaning that every tail of the word (of the form $w_k\cdots w_n$ for some $k$) has at least as many $1$’s as $2$’s, at least as many $2$’s as $3$’s, and so on. In other words, when reading the word from right to left, the smaller letters always occur more frequently than larger letters. For instance, the word $$12122111$$ is ballot, and it is not hard to see that ballotness in a word with just $1$’s and $2$’s is equivalent to the condition that every $2$ is bracketed with a $1$, so that $E_1$ is undefined.

The key fact about tableau crystals is as follows:

Every connected component of a crystal graph has a unique highest weight element. 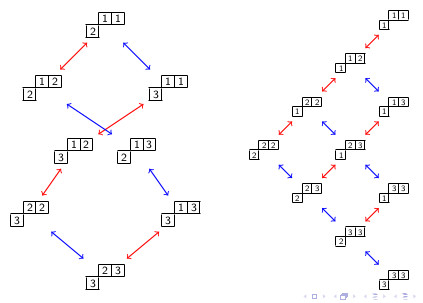 Note that each connected component has a Littlewood-Richardson tableau at the top, and no other elements are killed by all raising operators. Notice also that the first graph above has the same structure as that of the shape $(2,1)$ crystal drawn above. This is no coincidence: another key fact about the operators $F_i$ and $E_i$ is that they commute with Jeu de Taquin rectification, which is easily proven using Knuth equivalence. The tableaux in the shape $(2,1)$ crystal are simply the Jeu de Taquin rectifications of those in the corresponding component of the $(3,1)/(1)$ graph. Similarly, the tableaux in the second component rectify to form the tableau crystal for shape $(3)$. It follows that, if we sum the monomial weights in the graph, we obtain the equation $$s_{(3,1)/(1)}=s_{(2,1)}+s_{(3)},$$ which is an instance of the famous Littlewood-Richardson rule.

or equivalently, after a bit of symmetric function theory manipulation,

The latter equation now follows immediately from the facts about crystals listed above, as we saw for the shape $(3,1)/(1)$. We can also prove the product version directly using crystals, by introducing a tensor product. There is a natural tensor product on crystals coming from their correspondence with Lie algebra representations, which we will define in general on the next page. In combinatorial terms, we can define the tensor product of crystals of tableaux by defining the concatenation of two tableaux $T$ and $S$ to be the tableau $T\cdot S$ formed by drawing $S$ above and to the right of $T$, with the lower left corner of $S$ matching the upper right corner of $T$. For instance, tableaux of skew shape $(3,1)/(1)$ can be formed by concatenating a tableau of shape $(1)$ with a tableau of shape $(2)$. (Note that this concatenates the reading words of $T$ and $S$ as well, and induces the plactic monoid structure on Knuth equivalence classes of words.)

With these examples in mind, on the next page we will define the tensor category of crystals over any semisimple Lie algebra.

One thought on “Addicted to Crystal Math”