In a previous post, we briefly described the complex Grassmannian $\mathrm{Gr}(n,k)$ as a CW complex whose cells are the Schubert cells with respect to a chosen flag. We’ll now take a closer look at the details of this construction, along the lines of the exposition in this master’s thesis of Tuomas Tajakka (chapter 3) or Hatcher’s book Vector Bundles and $K$-theory (page 31), but with the aid of concrete examples.

Let’s first review the notion of a CW complex (or cell complex), as described in Hatcher’s Algebraic Topology.

To construct a cell complex, one starts with a set of points called the $0$-skeleton $X^0$, and then attaches $1$-disks $D$ via continuous boundary maps from the boundary $\partial D$ (which simply consists of two points) to $X^0$. The result is a $1$-skeleton $X^1$, which essentially looks like a graph: 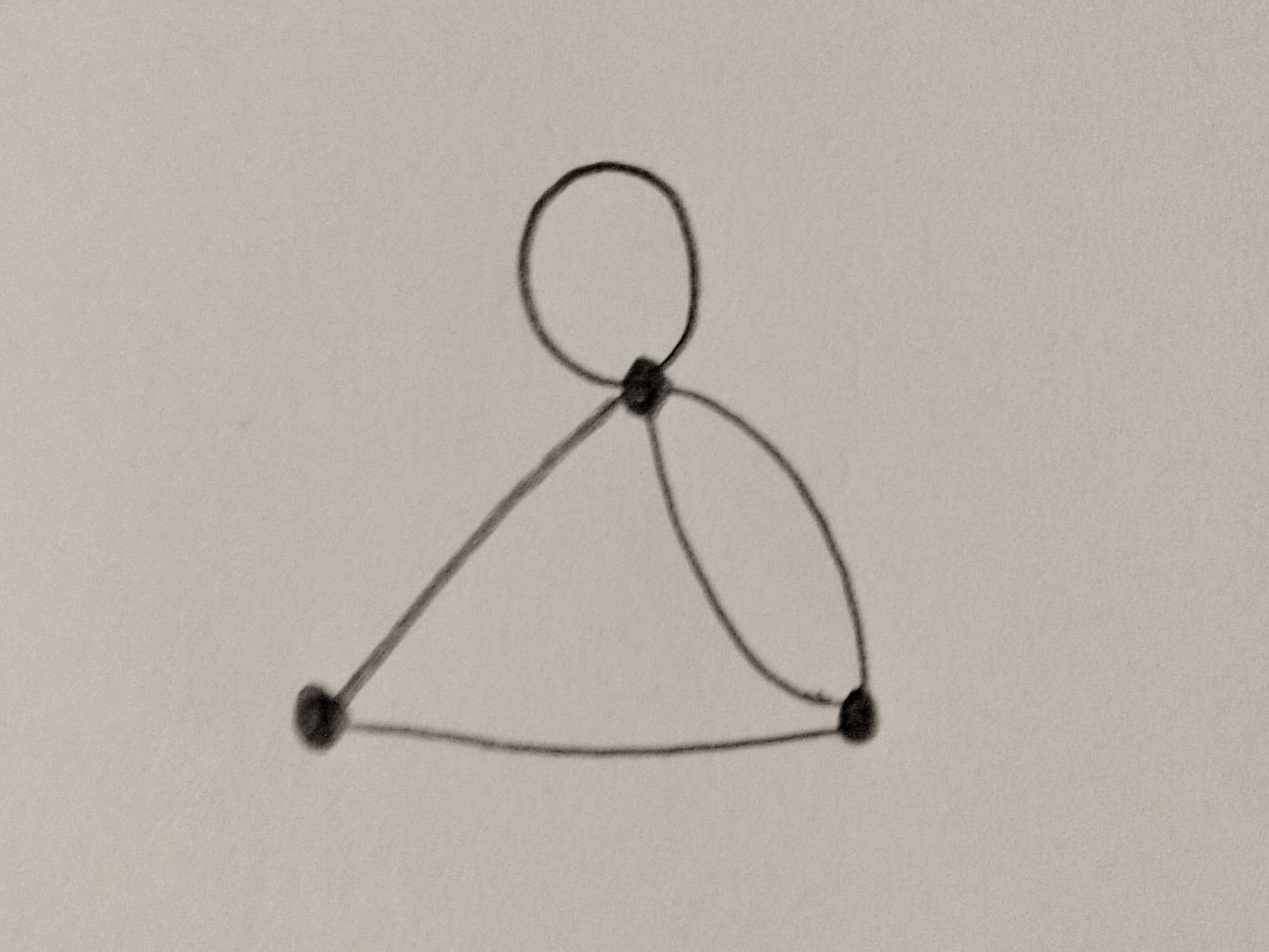 This an then be extended to a $2$-skeleton by attaching $2$-disks $D$ via maps from the boundary $\partial D$ (which is a circle) to $X^1$. Note that, as in the picture below, the attaching map may collapse the entire boundary to a point, making the circle into a balloon-like shape. 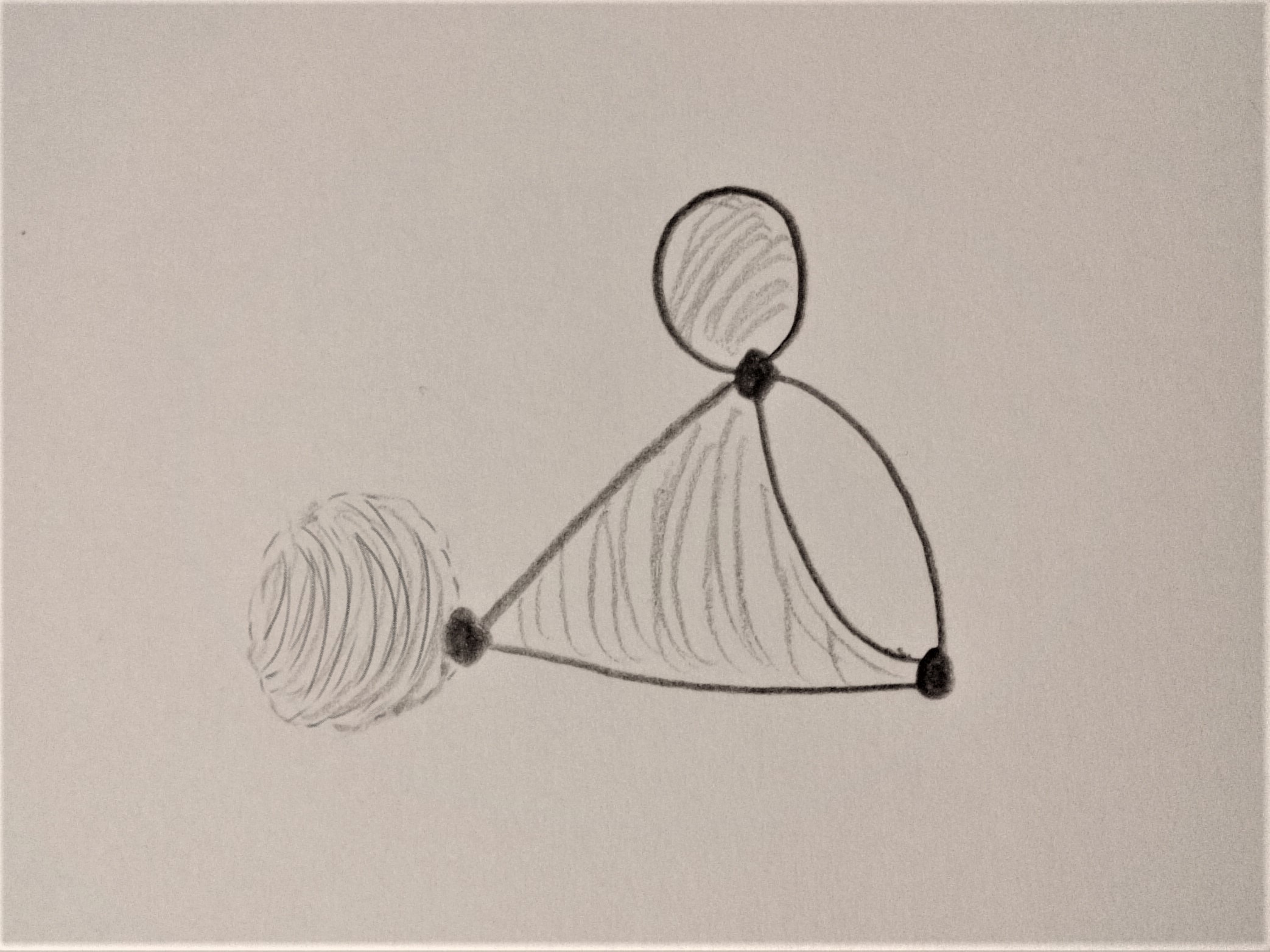 A nearly identical construction to the one above can help us realize the complex projective plane $\mathbb{P}_{\mathbb{C}}^2$ as a CW complex as well, though the structure is somewhat different.

Note that these constructions can be continued for higher dimensional projective spaces over $\mathbb{C}$ or $\mathbb{R}$.

We now can analyze the complex Grassmannian $\mathrm{Gr}(n,k)$ – the space of $k$-dimensional subspaces of $\mathbb{C}^n$ – in a similar manner to that of a complex projective space. In fact, $\mathbb{P}_{\mathbb{C}}^n=\mathrm{Gr}(n+1,1)$, so we have already done this for some Grassmannians.

Now, there is a natural quotient map $q:V_k\to \mathrm{Gr}(n,k)$ given by row-reducing the matrix formed by the $k$-frame, as we did in this post. Note that $V_1=\mathbb{C}^n\setminus\{0\}$ is the space we used above for projective space, and that $q$ matches our map above in this case.

We will not go into full details of the CW complex construction here, since Tajakka’s paper does it so nicely already. Instead, let’s outline the construction for one of the nontrivial attaching maps in $\mathrm{Gr}(4,2)$.

Recall that in $\mathrm{Gr}(4,2)$, the Schubert varieties are indexed by partitions whose Young diagram fits inside a $2\times 2$ rectangle. The Schubert variety $\Omega_{(2,2)}$ (with respect to the standard flag) consists of the single point of the Grassmannian represented by the row-reduced matrix

We now wish to show that $D$ is topologically a $4$-disk, making $q$ an attaching map. This is the tricky part in general, but we’ll describe the proof explicitly in this special case.

The real Grassmannian also has a CW complex structure, given by an almost identical construction to the one above (see Hatcher, page 31). Let’s analyze the map described above, replacing all complex coordinates with real ones.

Thanks to Jake Levinson for enlightening mathematical discussions that motivated me to write this post.