In prior posts, we’ve seen that the irreducible representations of the symmetric group $S_n$ are in one-to-one correspondence with the partitions of $n$, and the Schur functions give an elegant encoding of their characters as symmetric polynomials. Now we can dive a bit deeper: a geometric construction known as the Springer resolution allows us to obtain all the irreducible representations of $S_n$ geometrically, and as a side bonus give natural graded representations that will allow us to define a $q$-analog of the Schur functions known as the Hall-Littlewood polynomials.

Quite a mouthful of terminology. Let’s start at the beginning. 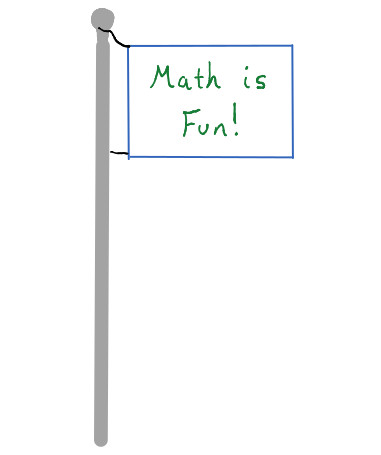 Roughly speaking, a flag on a flagpole consists of:

(Our higher-dimensional flag-waving imaginary friends are living in a world of complex numbers because $\mathbb{C}$ is algebraically closed and therefore easier to work with. However, one could define the flag variety similarly over any field $k$.)

Now that we’ve defined our flags, let’s see what happens when we wave them around continuously in space. It turns out we get a smooth algebraic variety!

Indeed, the set of all possible flags in $\mathbb{C}^n$ forms an algebraic variety of dimension $n(n-1)$ (over $\mathbb{R}$), covered by open sets similar to the Schubert cells of the Grassmannian. In particular, given a flag $\{V_i\}_{i=1}^n$, we can choose $n$ vectors $v_1,\ldots,v_n$ such that the span of $v_1,\ldots,v_i$ is $V_i$ for each $i$, and list the vectors $v_i$ as row vectors of an $n\times n$ matrix. We can then perform certain row reduction operations to form a different basis $v_1^\prime,\ldots,v_n^\prime$ that also span the subspaces of the flag, but whose matrix is in the following canonical form: it has $1$’s in a permutation matrix shape, $0$’s to the left and below each $1$, and arbitrary complex numbers in all other entries.

Finally, in order to paste these disjoint open sets together to form a smooth manifold, we consider the closures of the sets $X_w$ as a disjoint union of other $X_w$’s. The partial ordering in which $\overline{X_w}=\sqcup_{v\le w} X_v$ is called the Bruhat order, a famous partial ordering on permutations. (For a nice introduction to Bruhat order, one place to start is Yufei Zhao’s expository paper on the subject.)

Now suppose we wish to answer incidence questions about our flags: which flags satisfy certain given constraints? As in the case of the Grassmannians, this boils down to understanding how the Schubert cells $X_w$ intersect. This question is equaivalent to studying the cohomology ring of the flag variety $\Fl_n$ over $\mathbb{Z}$, where we consider the Schubert cells as forming a cell complex structure on the flag variety.

One thought on “The Springer Correspondence, Part I: The Flag Variety”