I’ll be flying to Nebraska tomorrow to teach at the Math Olympiad Summer Program. One of my more advanced classes will be on projective geometry and how it can help us understand Euclidean geometry. I thought I would share the introduction from my handout, since it is an attempt to demonstrate one of the many reasons projective geometry is such a gemstone:

Let’s start with some general theory. A projective plane is any set $P$, which we call the set of points, and a nonempty collection $L$ of subsets of $P$ called lines, such that the following four axioms hold:

P1: Every pair of distinct points are contained in exactly one line.

P2: Every pair of distinct lines intersect in exactly one point.

P3: There are four distinct points $a,b,c,d\in P$ no three of which lie on a line.

Axiom P2 raises some alarms. In Euclidean geometry, we assume that there are parallel lines that never meet, but here, we’re requiring that every pair of lines intersect. So the usual Euclidean plane is not a projective plane.

However, there are many interesting projective planes that do come in handy. The simplest and smallest example of a projective plane is known as the Fano plane, or $F_7$, consisting of seven points and seven lines as shown below. 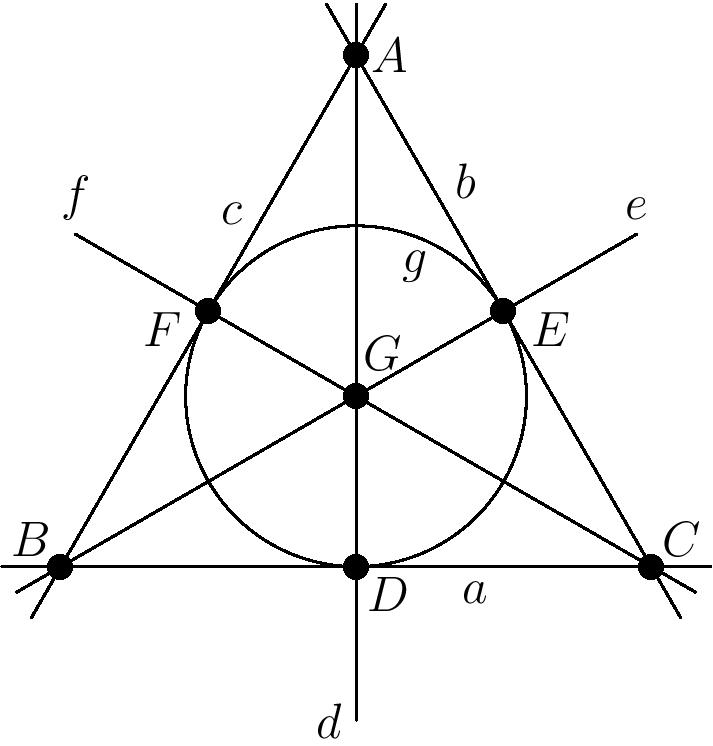 Notice the terms “point” and “line” are interchangeable in the axioms above. We can in fact interchange the roles of points and lines in any projective plane to obtain another projective plane, called the “dual” projective plane. Some projective planes, like the Fano plane above, are even self-dual! (In the diagram above, we can associate each point $A, B, C,\ldots$ with its corresponding lowercase-letter line $a, b, c,\ldots$, and incidence is preserved: points $A$ lies on lines $b$, $c$, and $d$, whereas line $a$ contains points $B$, $C$, and $D$. And so on.)

The projective plane we’ll be dealing with today is the real projective plane, which is an extension of the Euclidean plane that gets rid of those nasty parallel lines by adding an extra line out at infinity. Let’s take a look.

The real projective plane was first defined by Desargues as an extension of the Euclidean plane $\mathbb{R}^2$ that forces parallel lines to intersect “at infinity”, hence creating a plane that satisfies axiom P2 rather than the parallel postulate. When you think about it, this is a rather natural model of things we see in reality. Suppose you are standing on parallel train tracks and looking out towards the horizon along the direction of the tracks. The tracks are parallel, but they appear to converge to a point on the horizon. In this sense, Euclidean geometry is simply a local version of projective geometry; parallel lines are only truly “parallel” near your feet!

It’s not hard to see that this satisfies axioms P1-P4 above. Any two lines that were parallel in $\mathbb{R}^2$ now meet at the point at infinity corresponding to their pencil.

Exercise. Show that the unit circle, expressed in homogeneous coordinates, is described by the equation $$x^2+y^2=z^2.$$ Why doesn’t the equation $x^2+y^2=1$ make sense in the projective plane?