A parabola can be defined as the locus of points equidistant from a fixed point (called the focus) and a fixed line (called the directrix). But we know from projective geometry that parabolas and ellipses are essentially the same object. Does this mean we can also define an ellipse in terms of a point and a line?

While tutoring a high school student recently, we worked through a problem that was essentially showing just that in a special case. Remarkably:

An ellipse can be defined as the locus of points $P$ for which the distance $|PF|$ to a focus $F$ is $\alpha$ times the distance from $P$ to a fixed line $\ell$ for some positive real number $\alpha\lt 1$.

For instance, if we make $\alpha=1/2$ we would get an ellipse, whereas if $\alpha=1$ then it’s such a large ellipse that it’s a parabola!

Let’s check the math here. Recall that an ellipse is usually defined, synthetically, as the locus of points $P$ in the plane for which the sum of the distances $|PF_1|+|PF_2|$ for two fixed foci $F_1$ and $F_2$ is a fixed constant $s$. By translating this condition into coordinates, one can show that if we place an ellipse with its two lines of symmetry aligned with the $x$- and $y$-axes (with the wider part on the $x$-axis), centered at the origin, then the ellipse will have equation $$(x/b)^2+(y/a)^2=1$$ for some positive real numbers $a$ and $b$ with $a\le b$. 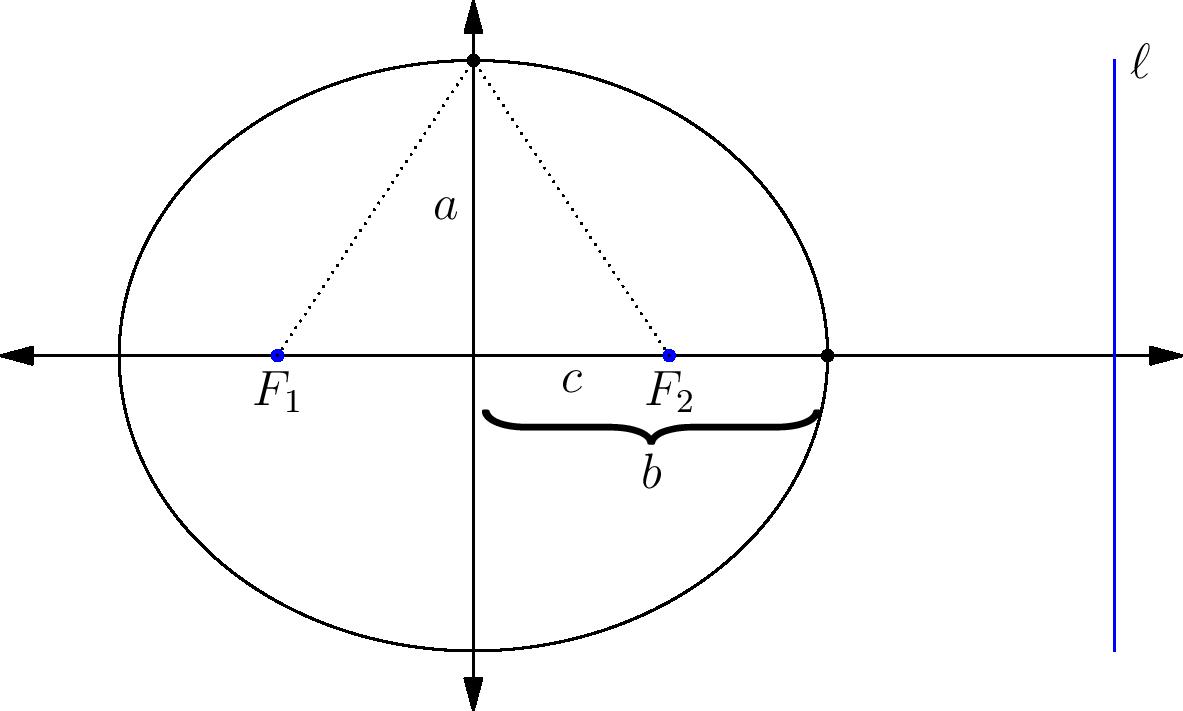 A few noteworthy observations: first, it’s remarkable that the focus of the ellipse as defined in terms of the constant-sum-from-two-focii definition coincides with the focus that appears in the focus-and-directrix version. This makes one wonder if there is some natural relationship between the focii and this new directrix $\ell$, perhaps in terms of reciprocation (see this post for the definition of reciprocation in a circle.) And indeed, if we apply the transformation $(x,y)\mapsto (x/b,y/a)$, which maps our ellipse $E$ to the unit circle, the point $F_2$ maps to the point $(\alpha,0)$ and $\ell$ becomes the line $x=1/\alpha$, so indeed $F_2$ and $\ell$ form a reciprocal pair!

Second, consider the degenerate case of a circle, when $a=b$ and so $\alpha=0$. The condition $\alpha=0$ doesn’t really make sense unless we interpret the diagram in the projective plane and allow the directrix to be the line at infinity, which again makes the focus (the center of the circle) be the polar of this line.

That’s all for today – a bit of fun with conics to kick off the new year. Happy and indivisible 2017!

One thought on “Ellipses, parabolas, and infinity”